FWCloud-UI allows you to create a Security Policy in a graphical, intuitive and an easy to use web user interface. The security policy is based on IPTables, so you will expect to find INPUT, OUTPUT and FORWARD chains, as well as SNAT and DNAT. You can configure the policy for IPv4 and for IPv6.

Out of the box, your firewall will have a scaffold with a minimum set of basic rules.

Remember that IPv6 is now functional in the majority of Linux based and Windows systems. Some installations that seams to be quite secured have security issues when related to IPv6.

When you create a new firewall using FWCloud-UI you will have the minimum rules configured.

When you need to add a new rule, unfold the firewall group you want to add it to, unfold IPv4 or IPv6 policy group and select the appropriate chain: INPUT, OUTPUT, FORWARD, SNAT or DNAT.

On the policy panel you will see all the rules of that chain. Decide the position for the new rule. Right click on the leftmost side of the rule (that is, on the number of the rule) that occupies that position and select in the context menu Create new rule above or Create new rule below according to your criteria. 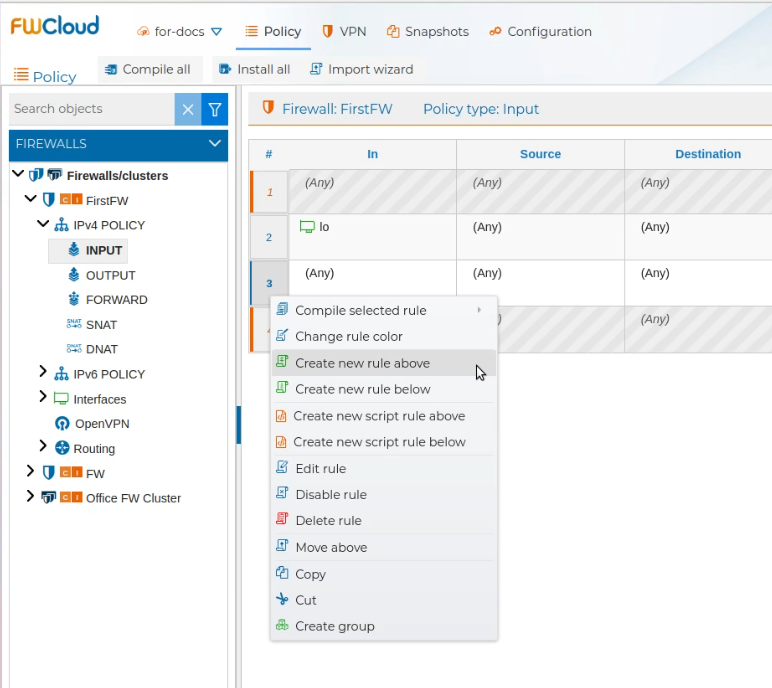 You will get a new rule added with Any value in the many of its fields.

To customize this rule according to its objective you just need to drag and drop elements on the fields. The majority of the operation in FWCloud-UI are done by drag and drop.

Sometimes is easier making copy of a previous rule and modified it than create a new one. Just right click on the left side of the rule and select Copy. Then go to the right position, right click again an select Paste above or Paste below.

It is possible too to select and copy several rules, not only one.

When you modify the policy of a firewall, by adding or changing any rule, two new icons appear next to the firewall name.

indicates the new policy needs to be compiled, and the

that it also needs to be installed in the target firewall.

The security policy is composed of firewall rules. In FWCloud-UI any rule is graphically represented as row in a table. The columns of the table are the fields of the rule.

When you need to add a new rule, unfold the firewall group you want to add it to, unfold IPv4 or IPv6 policy group and select the appropriate chain: INPUT, OUTPUT, FORWARD, SNAT or DNAT.

Not all rules have the same fields, depending on the firewall chain you are creating the rule. FWCloud-UI only allow you to fill in the appropriate fields

On them you can drag and drop interfaces, IP addresses, networks, prefix, etc. Check Objects section to know the kind of objects that can be used in a rule.

In order to create a new rule go to the corresponding firewall and expand it by clicking on the > symbol. You can create rules for IPv4 and IPv6 protocols. Expand the protocol and select one of the showed chains (INPUT, OUTPUT, FORWARD, SNAT, DNAT) The Policy panel will be changed to show all the current rules of that chain. Now decide the position for the new rule. Right click on the leftmost side of the rule (that is, on the number of the rule) that occupies that position and select Create new rule above or Create new rule below according to your criteria.

You will get a new rule added with Any value in most of its fields. This is kind of template for the new rule, you will need to customize this rule according to its objectives. Now just drag and drop elements on these fields. The majority of the operation in FWCloud-UI are done by drag and drop.

A FWCloud rule is composed by drag and drop elements from the left panel of the FWCloud-UI to the proper box of the rule. For instance, let's suppose you start from a fresh new rule like this:

and drop it in the In box,

then continue with eth1 [WAN] in the Out field ...

and the rest of the fields ... 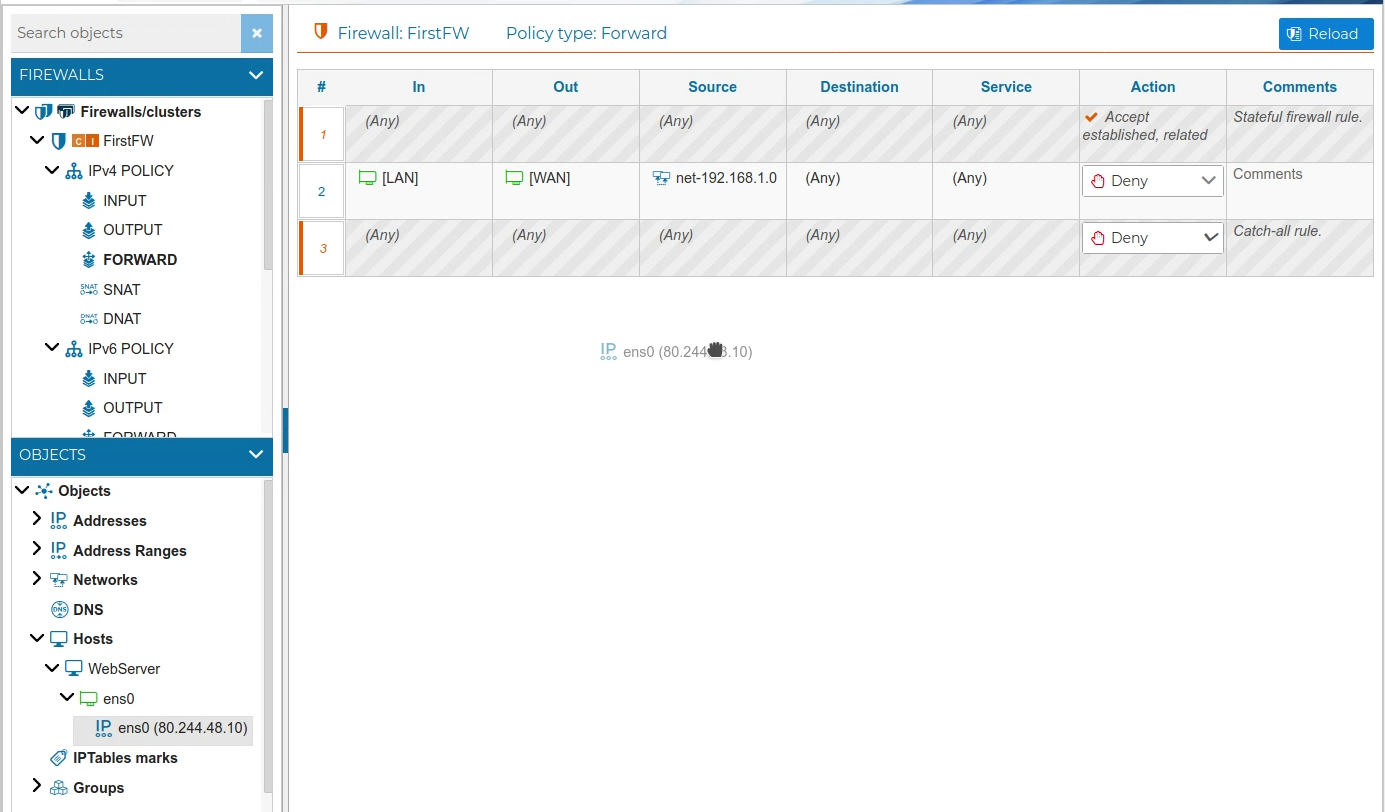 until the rule is exactly as you want it:

In order to avoid creating a rule than could lead to an incorrect policy, FWCloud-UI detects when you are adding and empty group, that is, a group with no elements in it. 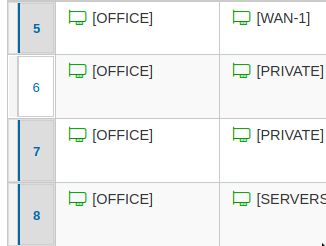 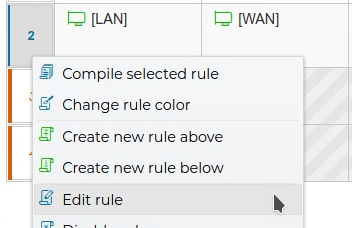 Editing a rule allow you to modify its properties

Here you can set if an individual rule takes into account the state of the connections with matching the packets or not. FWCLoud-UI configures all rules as stateful if the "Stateful firewall" is set on the firewall options (this is the default), otherwise the rules are stateless.

Also can be activated the log of the packets that are matched by this rule. The output of the log is registered in syslog prefixed by the rule number. When the log is set, a rate limit of 60/minute is applied to the rule.

appears by the rule number.

We can make the policy rules to launch scripts. We call them "Hook scripts". They can be executed before or/and after the rule is loaded into the firewall. To associate them to a rule we just need to edit the rule an write the commands we want to be invoked in the proper text box.

Here we can put any shell command or executable file. These text fields are limited to 65000 characters, for more structured scripts it is better to write them in a separate file. The commands detailed here will be executed by the user employed to load the policy.

This feature is very important to be able to employ FWCloud in conjunction with other programs that also modify the system secure policy. For example we can make fail2ban ban an IP address right before loading a particular rule that allows ssh traffic, just adding "/usr/bin/fail2ban set sshd banip 23.34.45.56" in that rule.

If we want to load a bunch of iptables rules before the FWCloud policy we can write them in a script file and associate it to the Before-hook-script of the first rule of FWCloud.

We have to take into account that when the security policy is loaded, all the previous security rules are replaced by the new ones detailed in FWCloud-UI.

When a rule has associated scripts, it is graphically represented by an

icon next to the rule number. Also if we hover the mouse over this icon we a pop up messages show us this rules has scripts.

The scripts are also shown when we compile the rule. Next there is an example of a rule executing two scripts:

When composing or modifying a rule you can copy the objects from the rules you previously have and paste them in the new field.

Also for your convenience you can make a copy of a rule, right click on the number of the rule, select Copy and then right click the number of another rule and select Paste above or Paste below from the context menus.

This action can be done in more than one rule if you keep them selected.

appears at the bottom of the policy panel. If you click on it you can see the messages indicating the number of rules copied. You can removed them from the clipboard by clicking on the litter bin icon of the message.

In order to sort your rules you can cut a rule and paste on another position. This can be done by selecting Cut and then Paste above or Paste below from the context menu of the rules.

Also multiple selection of rules is allowed for this action.

Ctrl + X : Cut the selected rules to the clipboard

Once the rule or rules are cut you can see a

red icon. If you click on it you can see the rules that are cut and pending to be copied

Rules can be moved in order to compose the secure policy. To move a rule right click on the number of the rule, select Move above or Move below until the rules gets it right place.

You can do it with multiple rules if the are selected.

Ctrl + Up_Arrow : Move the rules above the first selected rule

Ctrl + Down_Arrow : Move the rules after the last selected rule

To better distinguish one rules from others or which part of the policy they affect, the background color of these can be modified.

You can modify the color using the color picker form. The most used colors will be remembered in order of use, to make it easy to reuse a previous used color 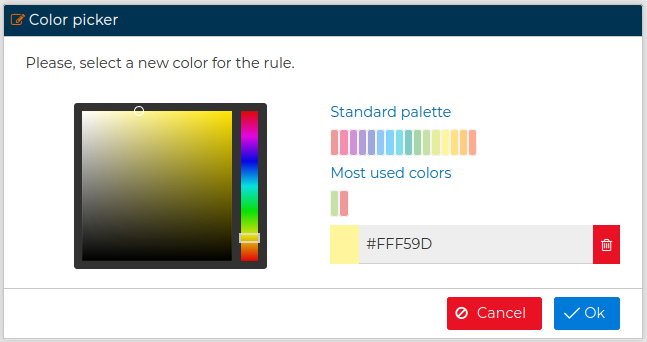 It is possible to change the color of multiple rules at the same time.

If you thing a rule is not going to be needed it can be removed from the policy. Right click on the rule number and select Delete rule.

Multiple selection of rules can be done for this action.

Del : Asks for confirmation and deletes the selected rules

Sometimes you want temporarily disable a rule but not deleted. Right click on the rule number and select Disable rule.

When a rule is disabled it is blurred and a white cross over red background appears by the rule number.

To re-enable the rule again select Enable rule in the context menu.

You can disable or enable all the rules that are selected.

If you have clicked on IPTables format a pop up windows will show the rule compiled for IPTables:

or compiled for NFTables format in the other case:

In order to organize the secure policy you can put rules into groups. First you need to create a group. A group is created from a rule than will go into it. Right click that rule and select Create group.

And fill the form with the name of the group.

By anytime you can rename a group of rules by editing it.

If a rule needs to be out of a group, right click and select Remove them from group.

The groups can be collapsed or expanded to the display the rules inside them. Also you can change the color of the group in order to visually separate one group from another.

If a group is not longer needed, it can be deleted.

After selecting one or more rules, the following keyboard shortcuts can be used:

The policy will take effect immediately after installed into the firewall.